THE UNDATEABLE GAY | Goes to the Taj Mahal 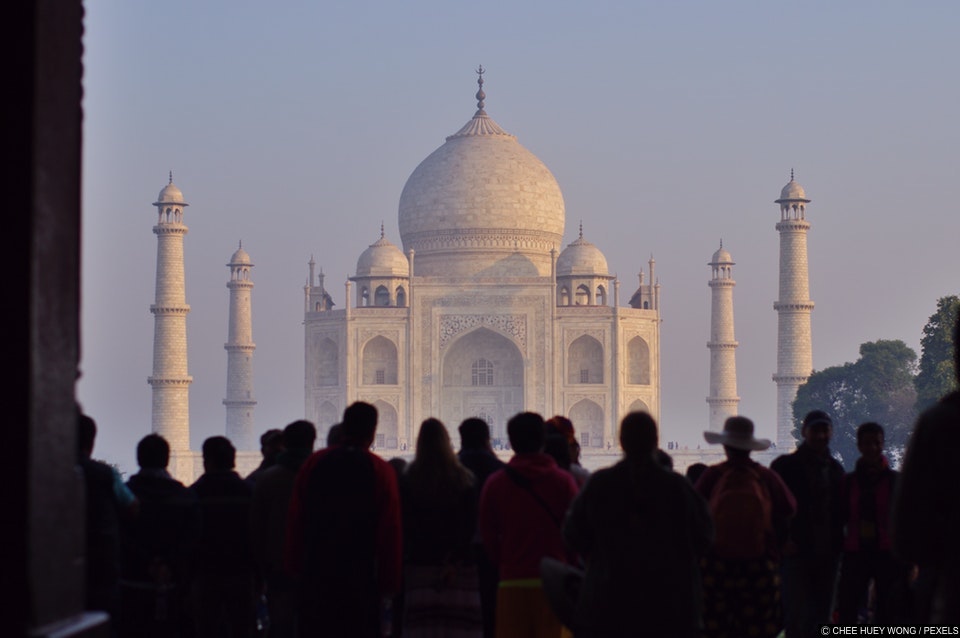 As you have probably guessed by the fact I’m writing part three of my Indian adventures, Tullene and I survived the cobra in the suitcase. Well, I say Cobra, it was actually a piece of polythene rustling under the air conditioning.

Now, no visit to India would be complete without a trip to the Taj Mahal. So, in our private hire car, we got, complete with our own driver. Only the best for us.

As we set off, I was reminded once more of the very bumpy roads. Clearly, no one pays road tax in India. Or if they do, the government certainly doesn’t spend the money on improving roads. The number of times my head bounced off the roof, I’m surprised I didn’t get a concussion. I came over all unnecessary as my bum kept swallowing up the seat belt holder.

After being constantly violated by the seat belt holder, we finally arrived at the Taj Mahal. Now, as my friends will inform you, I am rarely rendered speechless but on this occasion, I had no words. It’s one of the most beautiful sights I have ever witnessed in my entire life. I even had tears in my eyes. Another rare occurrence. I’m often called a stone-hearted gay boy.

As you’d expect, security is very high as you enter the grounds of the Taj Mahal. I had to have my man bag searched. Even though I’ve got nothing to hide, any security always makes me so nervous. I have an irrational fear that someone may have planted drugs on me and I’ll be locked in an Indian jail.

My bag came out the other side of the X-ray machine and I saw three security guards grab my bag. Oh shit, I thought, someone, has planted drugs in my man bag. I felt sweat drip and hit my HD eyebrows.

They ripped open my man bag and pulled out my Gay Times magazine.

“You can’t have this!” I heard the security guard bellow. And he turned around and ripped it up. Bloody cheek, shredding my Gay Times. I was more annoyed that I hadn’t even read that issue yet.

After that nerve-wracking incident, I decided I needed to urinate. I found some toilets (not the best or cleanest facilities I’ve ever whipped my cock out in but they had to do). As I stood peeing at the urinal, I noticed an arm, rubbing against my arm.

I plucked up the courage to look across and I witnessed this man, staring down at my penis. Cor, he’s got no shame. It’s clearly a novelty to see a white cock.

We entered the grounds and saw some wild monkeys. That was a sight I just had to capture. I got my camera and started papping the monkeys. The next thing I knew, we were surrounded and circled by ten monkeys, all nipping at our ankles. I don’t think they appreciated having their photo taken.

All that was going through my mind was the fact I hadn’t had a rabies jab. When my pharmacist asked me if I’d be in contact with wild monkeys, I said, oh no, of course not. Famous last words.

Finally being rescued by the monkey whisperer, we went down to the souvenir stalls outside the Taj Mahal. But shopping in India really annoys me. No one just lets you browse. They’re always trying to sell you things. Got right on my moobs. As we were walking along this particular market, a man grabbed my arm and dragged me inside his shop. Jesus, I screamed, this is forceful selling.

“Why don’t you get rid of your friends and come into my stock room with me?”

Obviously, doesn’t want to sell me any material items, I thought. My eyes widened at his question and I did consider it for a moment. He was rather attractive and you know my partiality to an Indian man.

Even though being gay is illegal in India, they’re all at it. Not afraid of the law clearly. I had to decline as Tullene was waiting for me outside. But he was so attractive, I had to drag myself away.

In conclusion, I’m clearly not undateable in India….