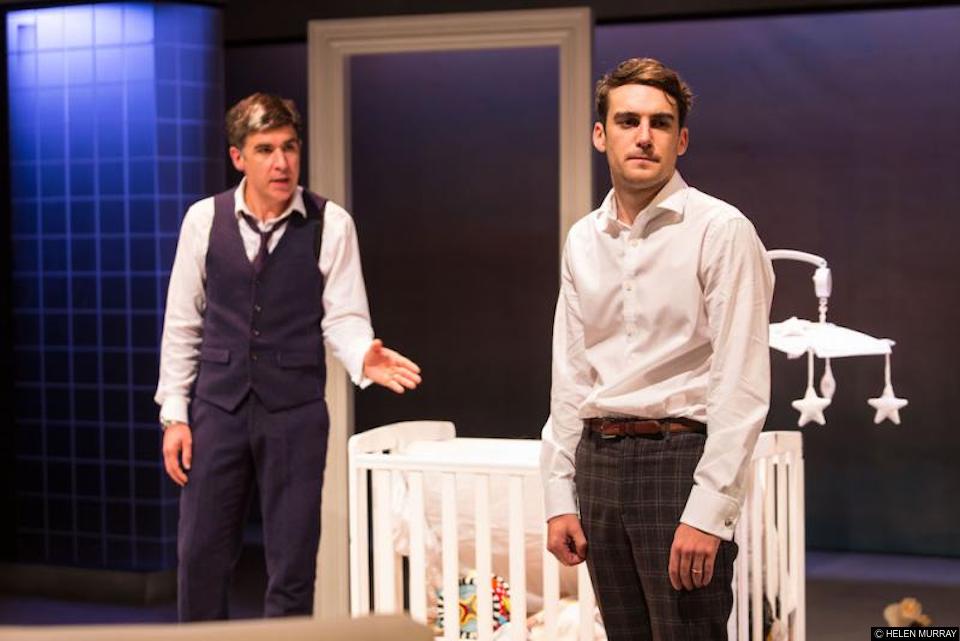 After a run in Sheffield Theatres’ studio, gay surrogacy themed comedy-drama Of Kith and Kin hits London at The Bush Theatre. Oliver and Daniel are 21st-century gays married with good jobs and a flat. Now it’s time to take the natural next step, start a family with Oliver’s best girl-friend acting as surrogate.

Chris Thompson’s play is a three-act drama and is mixed in tone and effectiveness. Starting out as a light sitcom with a twist, it morphs into a courtroom drama and ends with a more emotionally intelligent third act. There’s something distinctly dated about the first act in spite of the modern update. There’s all the classic sit-com ingredients: happy couple, monstrous mother-in-law descending, waters about to break and high camp. The difference, of course, being that there are two fathers and one mother. The humour is tired at times and whilst it has wryly amusing moments it’s never uproariously funny. Joanna Bacon does a good job as the brash mum from Woolwich but it still feels limp. Speaking of limp: James Lance has some unfortunate mannerisms. He’s playing a 46-year-old gay man with a mischievous sense of camp but to me, he didn’t quite nail this and it felt like an unfortunate and unintentional misfire. His swishy hips and flapping wrists didn’t convince me and it felt like a straight man’s imperfect attempt at portraying a slightly effeminate gay man which was grating rather than being entirely offensive.

Act two moves on to the courtroom and again misses the mark. The key ingredient to a courtroom drama is a sense of tension but this felt slack in spite of strong performances from Donna Berlin as an improbably wisecracking judge. Finally, the third act is a more moving piece of drama and the play feels like it finds its feet but still, there’s a lot of holes and moments where the characters’ motivations feel unconvincing.

On the positive side: James Lance is a nuanced performer (in spite of his poorly pitched 1970s style interpretation of a gay man’s mannerisms). Equally strong in supporting his work are Joshua Silver and Chetna Pandya. There’s also an interesting and well-thought set of themes to the play. Thompson looks at intergenerational differences in the expectations of his character. Oliver at 46, was kicked out of home for being gay and has difficult family relationships, never expecting that monogamy, marriage and children would be on the horizon. Conversely, Daniel who is over a decade younger has every expectation that these things are part of his agenda and in spite of all this progress, Priya’s teenage son doesn’t seem to be having an easy time of ‘having it all’. The confrontations of the final act are genuinely moving and raise interesting questions.

It’s good to see a thought-provoking drama with some strong performances and emotive scenes. Whilst not excellent it has merits and is worth a look at the refurbished and plush Bush Theatre.