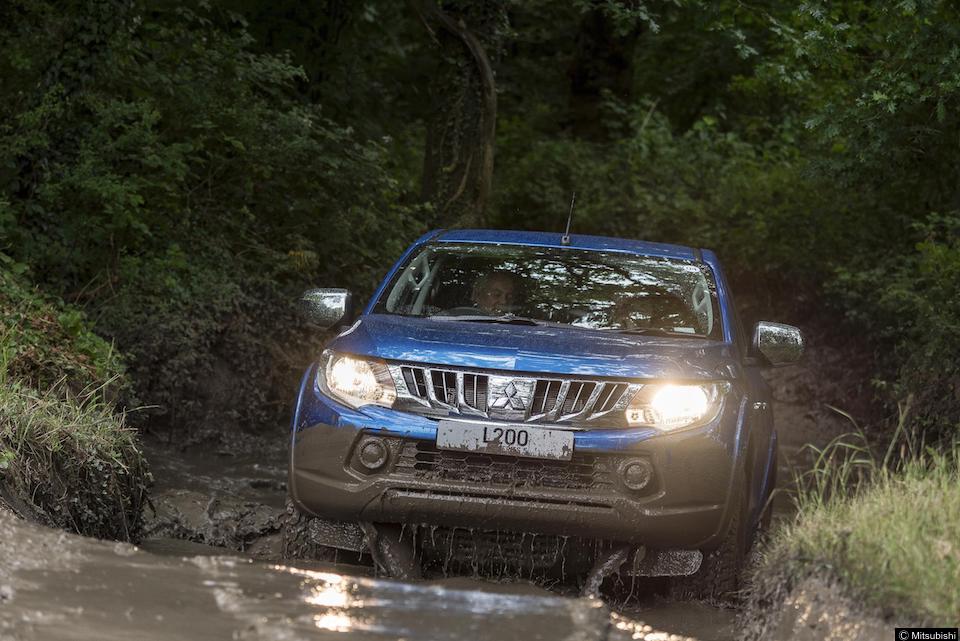 I don’t know quite what I was expecting when l took delivery of the new and improved series 5 Mitsubishi L200 Barbarian pick-up.

Visually you are made aware of its almost 5300mm in length. Its load bed length of 1470mm looked bigger than it actually was. The L200 range has come a long way since its launch in 1982 and the new model sees a subtle design change with some of the feminine curves replaced by straight lines making it look a little sturdier than the old model, while still being civilian friendly looking over the opposition from the likes of Nissan and Toyota. More importantly, there is now a city friendly tighter turning circle too. With 7 different guises of L200 pick-up available it is possible that every member of the family could find a pick-up to suit.

The interior finish is rugged looking and the leather-covered seats are comfortable. All plastic surfaces practical and functional plastic of the hard variety that literally makes cleaning a wipe over. The fascia is laid out well and all the controls minus the heated front seat switches were within easy reach. The steering wheel housed controls for the stereo, phone and cruise control. It was all quite too civilised for what a pick-up should be. Thankfully l found some hard edge plastic under the switches on the steering wheel. An ideal edge for filing off that hard skin from a day’s graft on-site. This masculine touch was then ruined by the floor lighting. Nothing wrong with floor lighting l hear you say but the blue was just a touch 2000’s Lexus and even they don’t do it in blue anymore. Even more, Lexus was the pick-ups “Barbarian” signature illuminated in the kick plates.

I developed a love/hate relationship with the inbuilt sat-nav and infotainment system. Its touch screen was easy to use for my thin fingers but having asked a real man we’ll call Dave to have a play, he moaned that its on-screen buttons were too compacted for his manly fingers. And the brightness of the screen at night was reminiscent to that of a Hollywood dashboard. So intense was the light l couldn’t use the sat-nav at night. The night option changed the colours making it harder to view quickly while on the move.

On the road, this fully loaded pick-up will set you back £30,238.80 with no options available because it literally has everything thrown at it or for £2000 cheaper when bought with the manual gearbox. Traction control is quite essential in 2WD mode. The 2442cc in-line 4 16 valve DOHC turbo diesel MIVEC engine packs quite a thud in the back when needed.

The price you pay for having a pickup that goes from 0-60mph in 11.8 seconds is that the 317 Ib.ft of torque at 2500rpm would spin the rear wheels without much provoking on moist surfaces. Select the 4WD and all the power was planted where you wanted it. Again on the road and over most surfaces it performed with car-like comfort and ability. The steering was nicely weighted more towards town driving ease with feedback of road ahead being well communicated through the thick-rimmed steering wheel. In 4WD mode, you could feel the front differential working via a slight rumble through the wheel.

The engine could be heard if really pushed but in the normal day to day it was bearably audible from a cold start until fully warmed. All this power doesn’t come with an added fuel premium either and official figures suggest a respectable 43.5mpg giving a range of over 700 miles. With today’s fuel prices that’s quite commendable for a tank that’ll cost you about £80 to fill. 4WD’s have become greener and cleaner over the years and the Barbarian is one of the greenest.

Remember that 5300mm in length l mentioned, in practice, it doesn’t feel that big on the road. Admittedly you will struggle to park it within a single bay at your local DIY store but the reverse camera and big mirrors make it an easy task. l am not the best at reversing anything bigger than a hatchback so the reverse camera was a nice addition and one of the best l have ever used. The lines that appear on the screen are just perfect for achieving your 10/10 parking space award. You shouldn’t find the Barbarian on that website where people park inconsiderately.

I have to conclude that overall l was impressed by almost every aspect of the Barbarian. Its ease of driving, the quietness of the cabin, the way it was screwed together and even the engine bay was laid out in a simple logical layout. It was better than l thought it could and should be and if you were to have just one vehicle for work and play then this has to be high on the list. It’s car like applications such as one touch door handles, push start, full electric windows, climate control and cruise modes all add up to make this a civilised machine for not a lot of money when you consider what it can do and where you could go with it. l wasn’t able to trial its off-road ability so l have to take Mitsubishi’s word for it, though with its long established history and range packed full of 4WD models I’m pretty sure this could take you as far away from civilian life as you’d want to go on a weekend. Sadly the Barbarian being so civilised it’ll remind you all too soon that you have work on Monday.