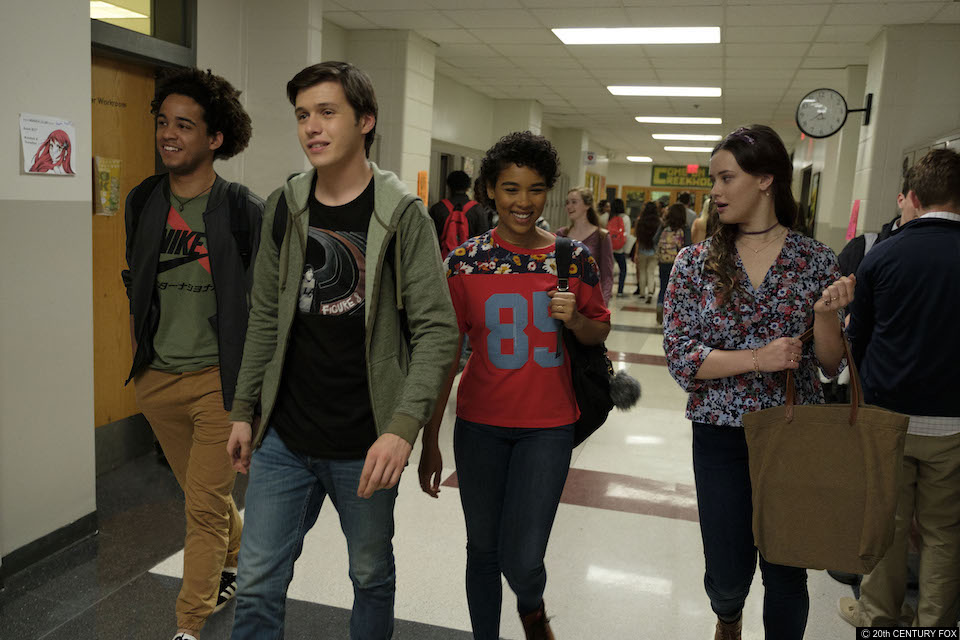 Simon Spiel (portrayed by Nick Robinson) has a “huge ass secret” in Love, Simon… he’s gay. The seventeen-year-old hasn’t told his perfectly ordinary nuclear family or his perfectly ordinary group of friends yet, but begins communicating with an anonymous Blue via email when he finds out through the school’s gossipy blog that Blue is also, in fact, closeted. Teenage drama ensues, complications arise but boiled down to its core, you’re left with a syrupy-sweet premise and a completely revitalised romantic outlook on life.

Despite knowing the reactions he’ll get probably won’t be as severe as they could be, Simon’s worry and fear of change encapsulate the paralysing effect of coming out – or the process of coming out – can take on any individual. As Simon attempts to figure out who Blue is, his daydreams and fantasies remind me just how much I used to do the same with every boy who smiled at me. Like Simon, I was lucky enough to have a minimal reaction when I came out; a cryfest followed by group hugs and soppy speeches from my parents. But watching the fear in his eyes when Martin (Logan Miller) threatens to leak his emails with Blue to the school reminded me just how insufferable the thought of this secret being exposed used to be. The constant guard that he has up, the fake bro talks that he has to keep having, to not let it slip is painstakingly familiar. The journey that Simon goes on, from not understanding why straight people don’t have to come out to the heart-warming post he makes where he embraces himself irrevocably, is something that I think most of us have experienced. It’s a feeling of rejoicing and acceptance that director Greg Berlanti makes you feel as if for the very first time. My eyes first watered when Simon choked on the word. He sputtered and couldn’t seem to get it out. Gay. These small nuances are what make the film more than a teen rom-com, even with the archetypal bullies and linear plot structure, there’s so much depth and warmth in this story that so many of us can see ourselves in.

Outside of Simon and Blue, the other characters (while, for obvious reasons, not getting as much screen time) still serve valuable purposes not only to the plot but to the world built around Simon himself. His parents (played by Jennifer Garner and Josh Duhamel) give the right balance of comedic and heartfelt, making us laugh and swoon and cry. Garner and Duhamel give equally charming and memorable performances, but Garner’s speech especially had the audience waiting with bated breath until she delivered the line – “You get to exhale now, Simon.” At that point, no one even attempted to hide their tears. Speaking of the audience, every time the drama teacher Ms Albright (Natasha Rothwell) came on screen our collective shoulders were shaking and our tummies were hurting from the amount of rip-roaring laughter she instantly produced. Out of Simon’s group of friends, while Abby (Alexandra Shipp X-Men: Apocalypse) and Nick (Jorge Lendeborg Jr. Spider-Man: Homecoming) certainly had their moments, Leah (Katherine Langford – 13 Reasons Why) shone the brightest but definitely suffered from sidekick syndrome. Maybe we’ll get to see more of her in future, if Becky Albertalli – the author of the book Simon Vs. The Homosapien’s Agenda, which the film is based on – gets Leah’s book on the big screen.

Everything from the cinematography to the marketing to the soundtrack had undertones of the old school teen movie genre, which makes sense since it’s the first major studio film focusing on a gay love story. I feel incredibly lucky to still be a teenager and have this film validate my experience with its normalcy, opening up a plethora of opportunities for more people’s stories to be told. The tagline of the film itself, “Everyone deserves a great love story”, encourages the exemplar celebration of diversity that Love, Simon does. Simon himself feels like such an easy character to get lost in, you see yourself in him or if not you, then your brother, your cousin, your friend, he’s an every man in the best possible sense and watching him fall in love is both infuriatingly sweet and extremely awkward in the best-worst relateable way as he navigates conversations with his potential love interests.

The characters that surround him are so vividly real, with their own quirks, going through their own things, you feel a part of Simon’s world just watching him listen to his playlist as he drives to pick up his friends. That kind of audience inclusion, be it through the editing or the camera technique, enhances the moral of the film of tolerance and inclusion. I might be biased, being the exact target audience (a gay teenager) but Greg Berlanti and the whole cast and crew have created a modern-day classic for those who liked but never identified with the Cady Herons, the Ferris Buellers, the Jim Levensteins and the Olive Penderghasts. I feel incredibly lucky to now have a Simon Spier.

Just a Gemini who likes long walks on the beach.