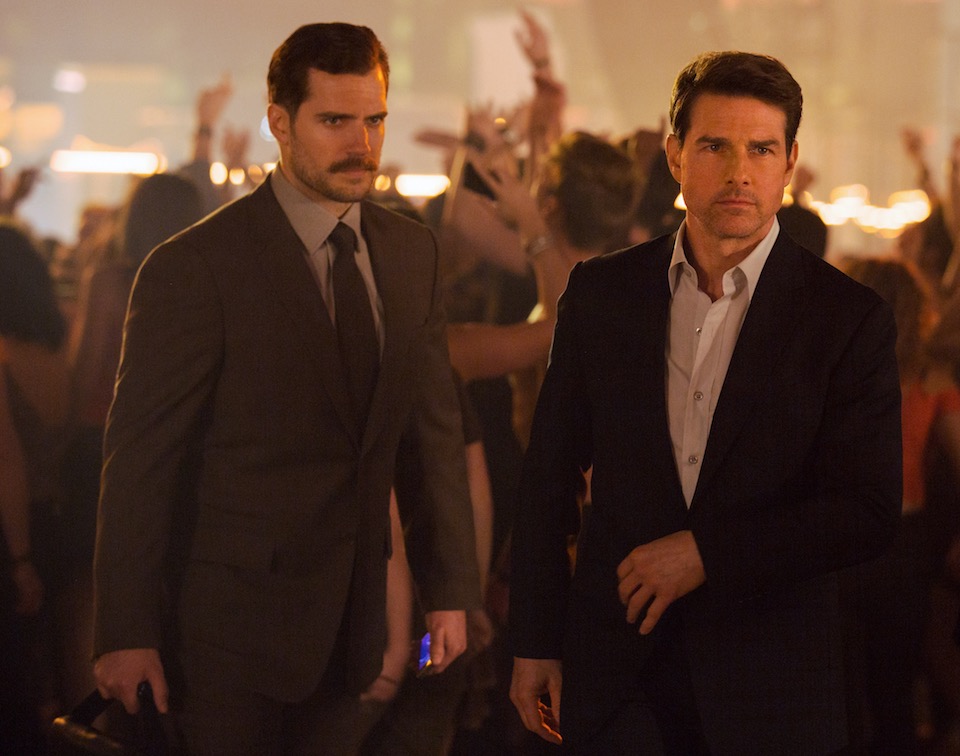 MISSION IMPOSSIBLE: FALLOUT – The sixth high octane spy thriller of Impossible Missions
Nutshell – The IMF based loosely on the 60’s TV show this time have to find some missing plutonium that they let slip through their fingers in Berlin at the start of the film. An old adversary wants to blow up the world again, so Tom Cruise jumps out of planes, crashes motorbikes, falls out of helicopters and fights everyone in sight on a global action odyssey. This time he has the man mountain Henry Cavill shadowing him all the way and also has some women problems and half decent twists.
Running Time – 147 Minutes – Cert 12A. A very long movie that does fly by.
Tagline – ‘Some Missions Are Not A Choice’
THEGAYUK Factor – Tom Cruise is now 57-year-old and looks great for his age but the gay sex appeal is not what it was, but he does make great movies. Ving Rames, Simon Pegg and Alec Baldwin are never going to make it onto anyone’s wank bank list, but we do have one fantastic saving grace Mr Henry Cavill is stunningly hot, built like a brick shit house and looks like everyone’s dream fucking top.
Cast – Tom Cruise, Simon Pegg, Alec Baldwin, Rebecca Ferguson, Ving Rames, Angela Bassett, Sean Harris, a very very hot Wes Bentley and the straight face of CNN, Wolf Blitzer as opposed to the silver fox himself Anderson Cooper.
Key Player – Although this is Cruise’s show he is not really giving us anything new here. The director Christopher Mcquarrie is the first guy to be invited back for his second Mission as previously a new director was employed each time. This is not quite as good as his last film Rogue Nation and lacks that one signature stunt that we expect from this franchise but he is solid and holds it all together nicely.
Budget – $178 Million but it has the lowest opening of any Mission to date and is struggling to get the right number of bums on seats which is strange as it has good reviews and decent word of mouth perhaps its the same old same old feeling or the Worldwide heatwave.
Best Bit – 0.27 mins; A great well-filmed HALO (High Altitude Low Open) parachute jump which goes wrong is genuinely exciting but why they have to be so clandestine jumping out of a plane over Paris to avoid radar is anyone’s guess and a figment of the writer’s mind.
Worst Bit – 1.48 mins; The over contrived endless double-crosses hit full speed, and logic goes out of the window with the twists and irrational happenings that make Harry Potter or Star Wars look realistic but never mind just enjoy the action which is very good indeed.
Little Secret – These Missions are now largely all about Tom doing his own stunts, and it works because they do look real. Here he has four major ones; the HALO jump he spent a year training for, an extended helicopter action set piece where he did most of the flying, a Paris motorcycle chase without helmet including an against the traffic scene around the Arc de Triumph and that London-based foot chase where he busted his ankle and closed the movie down for months. Let the stunt guys do what they are good at fella maybe as the next Mission you will be in your sixties.
Further Viewing – Missions 1 through 5, Anything with the words Jason and Bourne in, The Man From Uncle, Spy, Kingsman, the more recent James Bonds.
Any Good – This is just a few points down on the last two Missions, and it is the longest, so there is a lot of story to wade through here. The action is as good as anything out this year and almost Fast & Furious level, and there are many positives especially the addition of Henry Cavill. You do get the feeling of deja vu though, fake interrogations again, a surprise mask wearer, The CIA infiltrated yet again, bosses being killed, and countdowns to explosions all so predictable why do bad guys have countdowns anyway they just exist so as the good guys can save the day with less than 10 seconds to spare. If you want to destroy the world why take your time?
Rating – 72/100