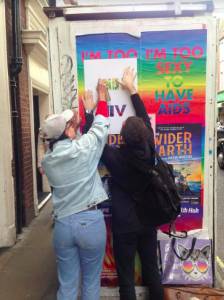 (SUPPLIED BY ACT UP)

(SUPPLIED BY ACT UP)

If you've been around Soho or South London recently you may have seen a  multi-colour poster which states "I'm Too Sexy To Have AIDs", activist group, ACT UP LONDON have defaced the posters to read something different.

If you’ve been around Soho or South London recently you may have seen a  multi-colour poster which states “I’m Too Sexy To Have AIDs”, activist group, ACT UP LONDON have defaced the posters to read something different.

Members of ACT UP LONDON have taken it upon themselves to change bill-posters designed by the late David McDiarmid and exhibited by Studio Voltaire because of the emotional trauma they may cause some people. The poster, is a multicoloured artwork which reads, I’m Too Sexy To Have AIDs”. According to Studio Voltaire, McDiarmid “produced these works in response to his own, and his community’s, experience of the AIDS crisis, and the multiple forms of devastations it manifests –political, emotional, intellectual and medical”.

McDiarmid died in 1995 from complications brought on by AIDs.

However some members of ACT UP LONDON have taken to defacing some of the posters because the message “isn’t helpful to the battles people living with HIV fight today”.

Cé from ACT UP LONDON explained, “Firstly, I would like to say that the main thrust of the action was never intended to censor the artist or to silence queer voices. Expanding on this, it’s important to point out that although the artwork may have been targeted at those that understand where this it comes from and why it exists, in its current state it is used out of context and isn’t helpful to the battles PLHIV fight today. The use of this piece of art taken so out of context not only takes us backwards in a fight that we are already struggling to win, but it also contributes to the stigma surrounding HIV. On the back of this it has the potential to be traumatic for those living with HIV, particularly for those with new diagnoses and especially for those who don’t have sufficient support networks to speak through the emotions conjured by the text in the artwork.”

Dani Singer from ACT UP LONDON said “We are incredibly supportive of Studio Voltaire and their decision to curate an exhibition of David McDiarmid’s work – as the second silence of HIV rages on, the more voices speaking out representing those affected by HIV and AIDS, the better. We see this action as a collaboration between ACT UP London and McDiarmid, in keeping with the strong tradition of ACT UP working with radical Queer artists throughout its existence to widen its message of ending the HIV pandemic, stigma, and pharmaceutical greed.

In a statement to THEGAYUK.com ACT UP London said, that the exhibition was counterproductive, with no supporting literature or context.

Explaining the works, Studio Voltaire explains on their website that they are displaying, “series of public works” which will be shown intermittently across sites in Clapham and Brixton, in partnership with This is Clapham and Art on the Underground. Studio Voltaire say that they will over the course of a year, publish artworks at various locations including neighbouring LGBTQ+ venue Two Brewers, the façade of Studio Voltaire, Brixton Underground station, and other temporary locations.

David McDiarmid (1952–1995) was an Australian artist, designer and activist, recognised for his prominent and sustained artistic engagement in issues relating to LGBT+ identity and history. Rainbow Aphorisms are a series of printed multiples, produced from 1993 until the artist’s death in 1995 of AIDS–related illnesses. McDiarmid produced these works in response to his own, and his community’s, experience of the AIDS crisis, and the multiple forms of devastations it manifests –political, emotional, intellectual and medical.

Siobhan Fahey from Rebel Dykes Film said, “The poster I’m Too Sexy to Have AIDS worried me, and I took my concerns to the gallery. When David was making art, in the 1990s, ironic art was much in vogue. It was powerful. But in today’s climate, with Trump and Brexit, we are almost post-irony. Statements like this need careful contextualisation. I support the aim of ACT-UP in repurposing these posters in a way I am sure that David McDiarmid would approve.”