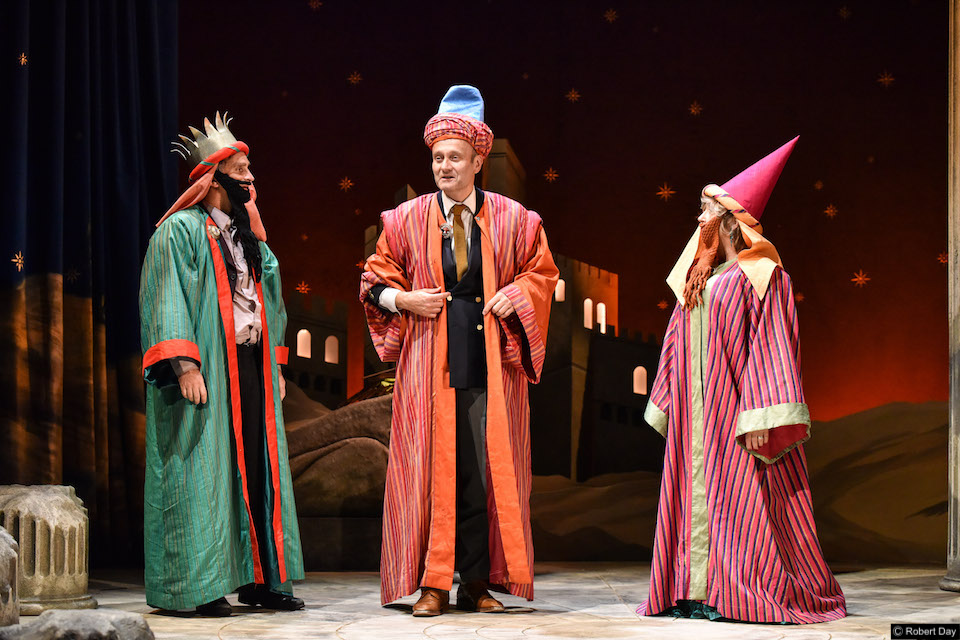 Sadly short on laughs, the handful of jokes stretch thinly over the show’s running time and even some forced audience participation can’t conjure up enough Christmas sparkle to elevate the show to a “must see”.

The Messiah unfolds as a travelling theatre troupe of two actors and an opera singer arrive by camel to masterfully enact the Nativity, albeit through personal breakdowns, misguided scenes and direct address to the audience in this comedic three-hander.

Hugh Dennis (TV’s Outnumbered and Mock The Week) effectively plays Maurice Rose, the kind of guy you wouldn’t want to sit next to on a long train journey, and who is the relatively straight man to John Marquez’s innocently naive fall guy, Ronald Bream. The humour is subtle, if repetitive at times, centring mainly on the deadpan delivery of the multiple characters and the mispronunciation of words and phrases, with a few trips and blunders thrown in as the characters struggle to get through the play.

The quality of the production overall is more than functional, with a versatile set, a decent lighting design and two fine central performances from the male leads.

But where the show itself stumbles is in its portrayal of a deliberately bad performance by the amateur company, which is so convincing, it actually just feels like watching a badly acted play. Furthermore, an underused Lesley Garrett looked slightly uncomfortable and out of her depth at times as the demanding diva; although to be fair to her, she did so with her tongue planted firmly in her cheek.

Sadly short on laughs, the handful of jokes stretch thinly over the show’s running time and even some forced audience participation can’t conjure up enough Christmas sparkle to elevate the show to a “must see”.

The Messiah is currently on Tour at Sheffield Theatres, before heading to Chichester, Cheltenham and Richmond; and arriving at The Other Palace in the West End on 3rd December for Christmas.