What do LGBT Conservatives think of Theresa May’s deal with the DUP? 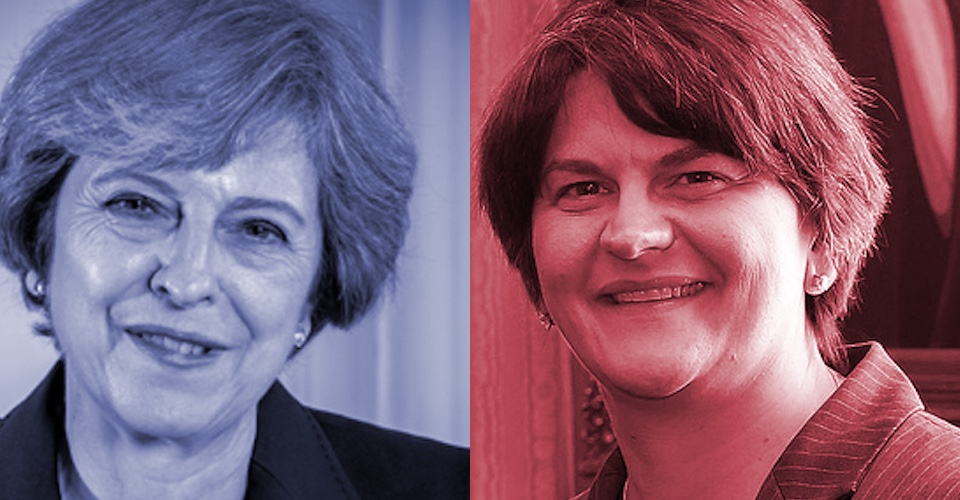 Ahead of next Wednesday’s Queen Speech, Prime Minister Theresa May is still attempting to solidify a deal that will keep her in Number 10. It looks likely that a confidence-and-supply arrangement could be reached with the Democratic Unionist Party of Northern Ireland, but their stance against same-sex marriage and other issues have divided LGBT Tory activists.

“There’s no point in denying that working with the DUP makes me personally uncomfortable,” said James Sean Dickson, a British-Irish dual citizen and Conservative Party Member. Dickson, however, has not resigned his membership and is a tad more optimistic about any deal struck between his party and the DUP. “It is quite clear that LGBT+ rights are not up for negotiation.” Former Conservative MP Ben Howlett – who lost his seat at the General Election – also made it clear that any deal needed to draw a hard line between the Tories and the DUP. “The message needs to be loud and clear that there will be no backtracking on LGBT issues in the UK.” He expressed an optimism that the deal could, in fact, give the government some leverage in pushing for further LGBT rights advances in the province. “I think this is a good opportunity for the UK government to negotiate a better deal for LGBT rights in Northern Ireland,” he said. “It is an opportunity the government should not pass up.”

Chris Taylor, a party member since 1995 who served as a London Councillor from 2002 – 2014, was more unconcerned than some of his fellow party members. Taylor, who describes himself as “ideologically centrist,” says he feels, “completely comfortable in regards to any deal with the DUP.” “It is important to remember that although I do not share the social beliefs of the DUP, they are the democratically elected majority party of Northern Ireland, and were seen as perfectly legitimate prospective partners for the Labour Party back in 2010.” He pointed to Labour leader Jeremy Corbyn’s own support for Sinn Fien, the nationalist republican party in Northern Ireland, as well as Corbyn’s support for what he calls “some Islamic fundamentalist groups that advocate death to gays” as evidence of the hypocrisy around the deal.

Dickson expressed a similar feeling on the perceived hypocrisy, saying that, “if Labour Party members are displeased by this election outcome they ought to ask themselves whether their leader should have utilised Press TV (the Iranian state-owned news channel) to air his views in the past, given the troubling Iranian LGBT* rights record.” Cautioning that, “we must not allow ourselves to be taken in by a bogeyman caricatures of the DUP,” Dickson told me that the party “is no longer the fire and brimstone expression” it once was.

Still, the party’s record has many people nervous about what this means for the Tory brand and for LGBT rights. I reached out to LGBT+ Conservatives for comment, but they instead referred me to a HuffPost UK blog by their chairman, Matthew Green. (In the interest of disclosure, the author of this piece is also a HuffPost UK blogger.)   “Let me be clear from the outset,” Green wrote, “the DUP and some of its MLAs hold some pretty appalling views on LGBT rights.” However, he adds the caveat that “given the need for stability ahead of the Brexit negotiations,” he – and it is assumed LGBT+ Conservatives, endorse a “loose co-operation” with the DUP “to ensure that Britain is able to get the right deal as it prepares to leave the European Union.”

Brexit was brought up by the individuals I spoke with, as well. “Even if [the DUP] wanted to, which they don’t, there is no time available to change equalities legislation given the timescale of Brexit,” Ben Howlett assured me. Chris Taylor agreed, saying that “we need to move forward, in a stable manner, [to] deliver a successful Brexit…” And James Sean Dickson also stressed that “with… days until Brexit negotiations begin, working with the DUP is the surest way to secure stability.”

Not everyone within the party agrees, though. James Wharton, the openly gay ex-soldier and author of Out in the Army, resigned his membership from the Conservative Party last week. “I’ve left on a point of principle,” he told me. “I can’t happily continue to spend money on my membership and willingly support the party when it spends that support on partnerships with political organisations who make people’s lives less enjoyable than they might otherwise possibly be.”

In a statement posted on Twitter and sent to his local Conservative Association, Wharton stated that, “as an active LGBT activist, proud of the direction our party has taken since 2010 where LGBT rights are concerned, I’m upset to see Theresa May establish this arrangement with an organisation so vehemently against gay and trans equality.”

He accused Mrs May of “throwing thousands of LGBT party members under the bus.” “How am I supposed to convince gay and lesbian friends of mine to support a party so in-bed with homophobia, intolerance, and discrimination? The answer is, of course, that I cannot,” he adds.