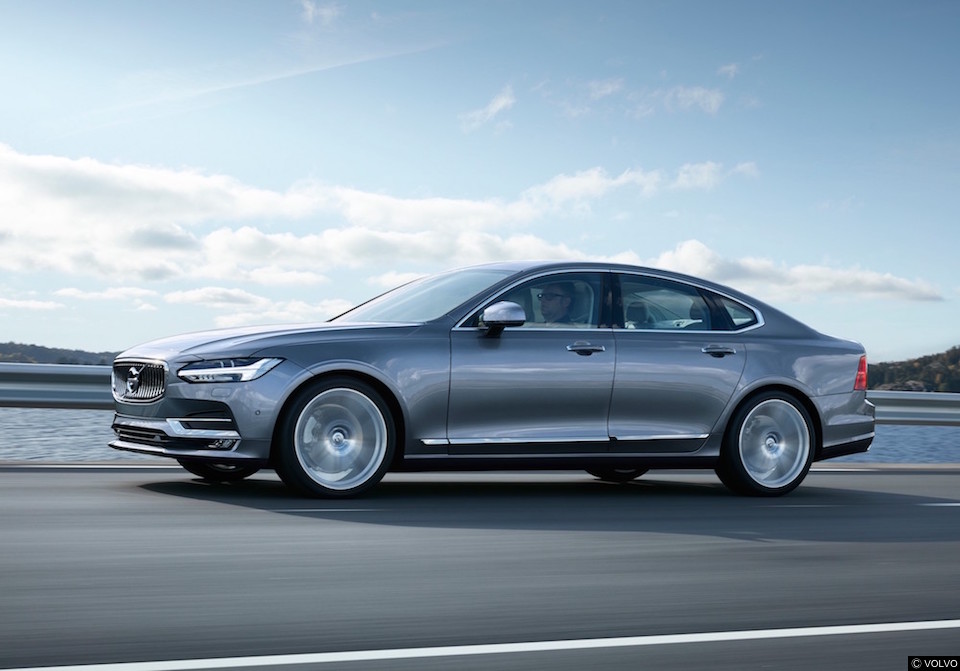 For the sheer quantity of the steel, this is quite a cheap car but don’t let that put you off. List price for the Inscription starts at £35,555.

On first acquaintance, I thought “I can’t drive this. The seat is too low” So low that I couldn’t actually see over the bonnet. Thankfully the seat has many adjustments and the £350 premium for this, is, money well spent.

We have a problem in the UK when it comes to large executive cars. We buy German. The French, Italians, the Japanese – for all the manufacturers there are, don’t send their luxo barges here anymore. We are to blame. So Volvo is hoping to take a slice of the action with their new S90 model. This could be reflective in their very competitive pricing and realistic sales forecast of around 2000 units a year. So don’t expect to see many in the carparks.

That in itself is a shame. Even in its light metallic blue colour, it is a handsome car. Executive cars tend to look their best in darker shades. The S90 is a well-proportioned design. Something Volvo has done a great job on because the S90 is a big car.

Everything is large in the S90. A trip to the Swedish flat-pack store revealed just how big it was. There was no need to fold down the rear seat. I experienced being a passenger in two places. First in the boot. It’s big enough for 2 bodies. The floor is flat and below the floor is the spare wheel and tools.

Rear seat room is also more than generous. Probably over generous if I am honest. The low-slung body belies the amount of headroom in the rear too. The rear seat is sadly lacking in under-thigh support for long legs. That said, leg room with me as a driver is more than ample.

The weather turned cold during my test. What did surprise me was the lack of a heated front screen yet the sonar for the car’s secondary safety features within the screen does have a heated element. It is a big screen to scrape on a cold day. Thankfully the S90 comes equipped with heated seats and steering wheel.

While I enjoyed the auto brakes in traffic, the auto handbrake has one massive annoyance. Unless you clunk click on the seat belt, it won’t let you drive off. This caught me out several times. Just moving the car on the drive resorted in wheel spin and a dragging of rear wheels. It just wouldn’t let go. Switch that system off and it doesn’t bother you.

The startup was quick if a little noisy. The 1969cc 190bhp diesel made you aware when it was cold. Once warm the usual diesel noises became subdued. Thankfully they became very subdued. Switch the optional £3000 Bowers and Wilkins speakers off and any noise would become apparent. It was eerily quiet, just what you would expect for this type of car. A nice feature for the stereo is where it put the sound. For most of the time, I had it set for driver enjoyment.

Driving the S90 is a pleasure. I covered quite a few miles during my test and I have to say it is a nice place to be. The ambience has been well thought out. Gentle lights within the doors just add something special to it. The polished aluminium trim is nicely set off by the wood coverings. It’s not over the top. It’s just right. At night time it is rather beautiful.

The S90 belies its modest 2-litre engine. That 400Nm of torque is available within a short rev range low down from 1750rpm. There is no turbo lag and put into ‘dynamic’ mode it heightens the throttle response making a rapid car feel more wild and feral. On the go this is marvellous, however, it does flag up a problem when stationary. That low down torque arrives quickly meaning pulling out in traffic is safe albeit a little messy with sudden wheelspin which is then curtailed by the traction control system.

The ride and handling are worlds apart from one another yet they compliment. The ride is supple and soothing. Never too harsh and certainly not Germanic. That in itself is quite refreshing. The handling, however, is not poised or crisp. The S90 is not a sports saloon in the BMW M5 guise. Don’t be fooled into thinking it is despite its ability to cover miles very quickly. What you do get is an overall pleasantness that is like driving with your Zen turned up to the max. I liked it very much.

Parking the Swedish barge is not a problem. It comes with assisted parking, reverse camera or 360-degree camera. All very easy to operate. The park assist is a clever bit of wizardry. A tight space in my road was child’s play for it both getting in and out. Now for all its techno toys it comes with crash prevention in its various forms, what did surprise me was that it wouldn’t stop during these manoeuvres. You had to hit the brakes.

The touchscreen infotainment system also adds to the nice feeling. It does pretty much everything from heating, stereo and satnav. The problem some systems have is they are too small for everything they have to cover. The S90 has a screen almost as big as an iPad and very quickly you find yourself navigating it without taking your eyes off the road. If I could award the car five stars I would on this beautifully thought out piece of kit.

Sadly it all goes wrong with the tactility of one important item. The outer door trims. For this loaded to the max S90 at £47,380 I didn’t expect to feel a harsh moulding line within the door frame trim. Now if only a little bit more time was spent on this trim. Not that this is going to be too much of a problem for the S90. The Swedish police who are very strict about their choice of police cars are about to take delivery. Now if it’s good enough for them, it’s more than good enough for all of us.