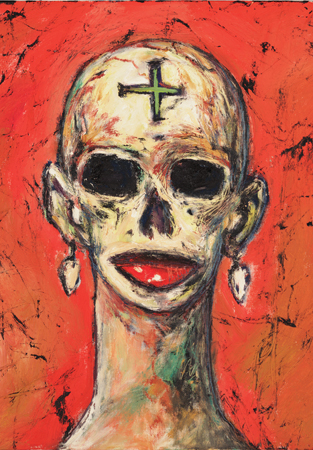 Why does gay art – in every form – completely eclipse its’ timid, straight rival? Because – quite simply – it’s fuelled by overwhelming lust. From the lush, teeming criminality of Caravaggio’s canvases, to the pouting proportions and Apollonian aphrodisiac that is Michaelangelo’s David, gay aesthetics scream artistic arousal. ★★★★★

Wherever you look – from breathless, pre-coital close-ups of James Dean in Rebel Without A Cause, or Francis Bacon’s trembling treatment of lover George Dyer – need utterly transfigures banality. So it should come as no surprise that recent LGBT practitioners of horror fiction – such as transgender writers Poppy Z. Brite and Caitlyn R. Kiernan – work a similar, witchy magic.

‘We have such sights to show you’, says Pinhead, the lead, S&M demon in gay film director Clive Barker’s Hellraiser movie, and he’s not kidding. Ah, but if your jaded, New Year tastes have moved beyond razor-wire fish-hooks dissecting your penis, then welcome queercore horror author Barbie Wilde. An actress, writer and dancer, her portrayal of Sister Cilice, the paranormal, nightmarish harpy from Hellbound: Hellraiser 2, remains an enduring icon of inverted, abattoir ecstasy.

It gets better yet. Perhaps wilfully self-possessed by her former, fictional self, Barbie’s just unleashed Voices Of The Damned, a feast of delirious sexual mayhem. More instantly, compulsively addictive than a chem-sex cocktail of crystal-meth, Barbie’s prose hooks like a frighteningly non-stop, body-horror wet dream. Have you ever seen, and God forbid, thoroughly enjoyed the Saw torture-porn franchise on repeat, slo-mo viewings?

Was that a yes? Tut-tut. Well, that hardly makes you a monster. The point, as Oscar Wilde so perfectly knew, is that art and aesthetics hover beautifully separate beyond good and evil. Why, just like Ms. Wilde’s ferociously non-PC tales of bodily excess, her artistic values – her unflinching willingness to confront insanity – are defiantly, gorgeously amoral.

And that’s just what the divine Ms.Wilde’s stories do – massacre any form of prior, or even conceivable, restraint. Not that she condones atrocity, just magnificently insists on her right to explore – and, more crucially, imagine – beyond any artificial limits of taste.

Better yet, the bloodshed’s as show-stopping as a homicidal ballerina, and refreshingly, wholly free from spineless hate speech and trigger warnings. Why even read horror if you don’t genuinely relish the wet-crotch arousal of vicarious, baroque sadism?

So should we lap up Ms.Wilde’s stunningly executed, literary savagery? Oh yes. ‘Zulu Zombies’, for instance, is a sickly comic, splatter-punk assault on the legacy of imperial English racism, while ‘American Mutant’ skins US religious hucksterism limb from sly con-man limb. Elsewhere, ‘Polyp’ explores a malign, excreted living cancer cell that grows huge and wreaks mayhem and ‘squats on a toilet like a disaffected teenager’, while ‘The Alpdrücke’ viciously sucks the nipples of paralysed sleepers.

But, unquestionably, Wilde’s finest moments come in her Sister Cilice trilogy, comprising that eponymous story plus The Cilicum Pandoric and The Cilicum Rebellion.It’s here that Wilde, with supreme, psychological insight, investigates the irresistible lure of transgression and the forbidden, the temptation to submit against one’s will. It’s a fluid exploration of the power exchanges in sex – consensual and otherwise – that no male, horror writer has even attempted, and Wilde’s depiction of the horror and beauty of willing violation is simply jaw-dropping.

Beyond the apparent, surface subject-matter of Sister Cilice constructing an object to pleasure curious women beyond endurance, and Cilice as birth-mother to a freshly-risen Hell, this is body horror as an unprecedented key to our own, previously uncharted states of sexual extremis, euphoria and transformation. No wonder Barbie shares her surname with the illustrious Oscar; she’s taken Wilde’s understanding of Dorian Grey’s transgressions and degradations and made them seem the first draft of some eager, but idiot, child.

Frankly, if Ms.Wilde’s ravishing, deviant muse is this accomplished now, speculation fails at imagining what succulent depravities she might yet unleash. Best, then, to savour her artistry in precise, bearably perverse portions; after all, half the joy in enforced depravity is being savagely denied further excess. So, finally, let’s raise a toast to the debauched, virtuoso seductions that form Barbie Wilde’s Voices Of The Damned, surely the sharpest, most bewitchingly queer voice modern horror possesses.