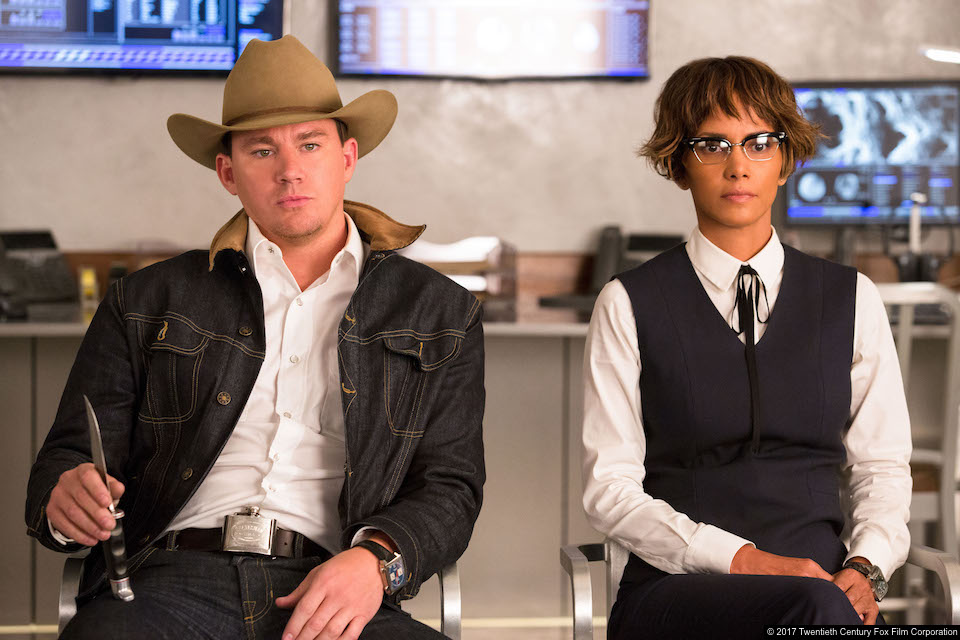 Nutshell – Eggsy and the sexy as fu*k Merlin (The shaggable Mark Strong) go on the run after Julianne Moore and her henchmen totally destroy the Kingsman spy organisation. So it’s off to Kentucky in the USA to meet the even bigger and better Statesmen organisation of great looking spies like Channing Tatum and Halle Berry, cue car chases galore, gadgets, robo attack dogs and the kidnap of Elton John via Glastonbury, The Alps and Cambodia in the sequel twice as explosive as the first.

Tagline – ‘Reports of my death have been greatly exaggerated
The Gay UK Factor – Taron Egerton – fit, Mark Strong – masculine, Pedro Pascal – Hairy Latin stud, Channing Tatum – Uber fit and loads of other thugs and good guys that no-one would kick out of bed – this is a true wank fest.

Cast – Egerton, Strong, Pascal and Tatum are backed up by Colin Firth (didn’t he die in the first one?), Keith Allen, Julianne Moore, Halle Berry, Michael Gambon, Jeff Bridges and Elton John with a real major part so plenty here to keep you occupied – how big will the cast be in part three and will Bennie and Jet the Robodogs be back?

Key Player – Matthew Vaughan the director and man behind Kick-Ass, The X-men, Lock Stock and Two Smoking Barrels, Eddie The Eagle etc is a master at mixing light content with bouts of extreme gore and action and he has the perfect vehicle here. He also writes the film here alongside Jane Goldman (Mrs Jonathon Ross) and their endless invention is here for all to see and boy is it giving the fans what they want.

Budget – $104 Million way up on the first film and its cash registers are ringing like crazy making that back in just 5 days so it is off into the land of mega profit from now. This is a big hit and some.

Best Bit – 1.31 mins; A breathtaking assault on an Alpine mountaintop stronghold climaxing in a truly stunning cable car sequence one of the best action beats of the year and it even beats the opening London Taxi fight/chase which is as good as any sequence of the Summer but the film just gets better as it goes on .

Worst Bit – 0.21 mins; Julianne Moore as the bad guy who has a thing for Grease style 1950’s Americana and her HQ is a Fonzie/Happy Days style diner is just not nasty enough even though she does have a mean trick of putting her enemies through a burger mincer – she is a bit like a fourth division Bond villain when we needed a nasty as f*ck Blofeld type.

Little Secret – There just having fun here but this movie stars a mega five Oscar winners in Firth, Berry, Moore, Bridges and Elton the latter for The Lion King. The original film length was over 3 hours 40 minutes which would have made it the longest blockbuster of the Millenium and beating Titanic/Avatar & any Lord Of The Rings film until the Studio insisted on cuts. This is Elton’s 21st acting credit and by far his biggest, he has starred in everything from SpiceWorld, Tommy and Bob The Builder in the past but here he gets to kick butt instead of shagging it.

Any Good – Matthew Vaughn said if you didn’t like the first one you are gonna really hate this one and likewise we believe the converse is just as correct. More of the same just bigger and brasher all in all not as good as the number one but isn’t that normal with sequels.