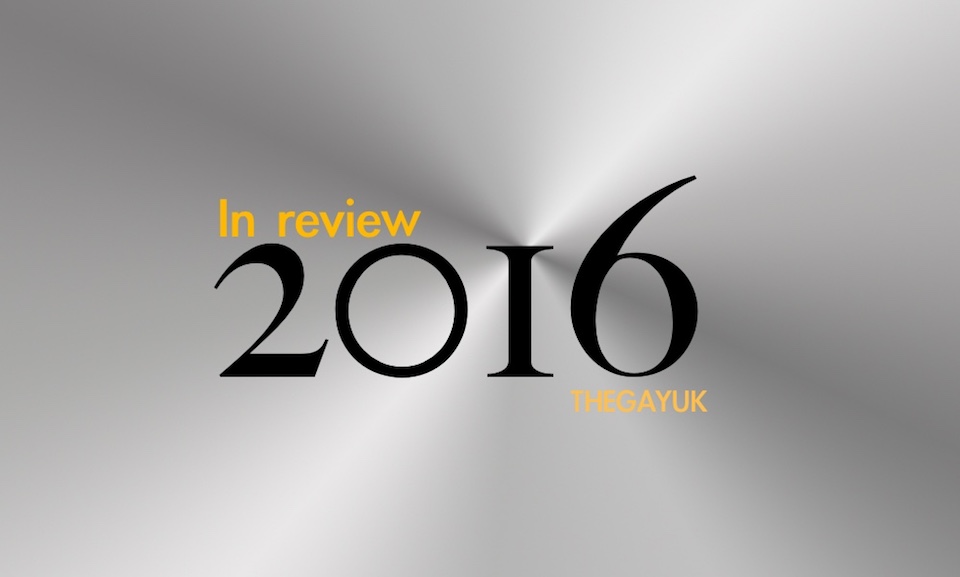 2016 has been a year that will go down in history as one of the most seismic of all time. From the election of Donald Trump to the UK voting to leave the EU, from the Pulse nightclub massacre to the continued persecution of gay men by ISIS.

There have been many stories that have and will continue to impact the gay community for decades to come. Here’s are just some of the top stories from the past 12 months.

David Bowie dies. The year starts with the unexpected death of David Bowie. 2016 would go down as one of the most shocking years for celebrity deaths.

ISIS executes 15-year-old boy. He was murdered for an alleged affair with an ISIS officer. The officer was spared the death sentence.

MP David Mundell comes out as gay. The Government got its first openly gay serving minister.

British LGBT Awards gets a bashing on Twitter. The motives behind the awards were questioned by some after a number of “strange” choices for nominees were revealed including YouTuber Zoella, and Zayn for being allies.

George Shelley comes out but didn’t want to be labelled as gay or bisexual.

Dustin Lance Black and Sam Smith get into a Twitter spat after texting with Tom Daley.

Marcus Feehily admits hiding his sexuality was like a “big secret” during his time in Westlife.

Olly Murs says he’s a bit gay and gets slammed by Neil Armin from Clean Bandits.

The owner of AXM dies. Haydn Pope died after a battle with Cancer. He was 49.

James Franco opens up about his sexuality and says he’s gay up to a point.

Tony Warren, writer of Coronation Street dies he was aged 79 and one of the UK’s most visible and openly gay TV writers.

The world is rocked by the deaths of  Prince, Victoria Wood, David Gest and Denise Robertson .

Sam Smith and Harry Styles on the UK’s rich list.

David Walliams criticised for “acting gay” during his judging of Britain’s Got Talent.

London gets a new Mayor and the gay community questions if he’s gay-friendly.

Jehovah’s Witnesses claim that gay people can be changed with outrageous and creepy Disney-like animation.

ISIS throw gay man to death claiming it was to “cleanse his sins”.

TV Star Colton Haynes comes out as gay, all pretty casual to be honest.

UK votes to leave EU. The world is shocked by the result. Hate crimes rocket after the results.

49 clubbers are massacred at a gay club in Orlando the worst single gun attack on American soil.

London stands still in the memory of those murdered and wounded in Orlando attack at Pride in London. A video message from David Cameron was booed and jeered at the Pride.

Cliff Richard says he’ll take his sexuality to the grave in a rather candid interview.

An attack in Manchester’s gay village shocks the community and leaves a man on life support.

Four men executed by ISIS for being gay.

Homophobic killer murders a man, moments after sex when he was most vulnerable.

Gay Royal… The first member of the extended Royal Family comes out as gay.

Bratavio makes it into the X Factor and gets vile homophobic backlash on Twitter.

Simon Cowell slammed for asking if Rylan likes the “backdoor”.

Clothing retailer gets a taste of reality after “real men” advert goes viral for all the wrong reasons.

Donald Trump elected as President of the USA. The homophobic language on social media soars in the days before and after the US election.

Cristiano Ronaldo doesn’t confirm or deny the rumours that he’s gay after seemingly coming out in an argument.

People worry for the mental health of songwriter and producer for RuPaul’s Drag Race, Lucian Piane.

Milo Yiannopoulous is slayed by the internet after appearing on Channel 4 news.

People get very het up over a question on the Loose Women Facebook page.

Saara Aalto announces her engagement to her girlfriend.

People think that Matt Terry and Freddy Parker are an item.

Shaving your pubes could leave you susceptible to getting an STI.

Man accused of being gay executed in Aleppo.